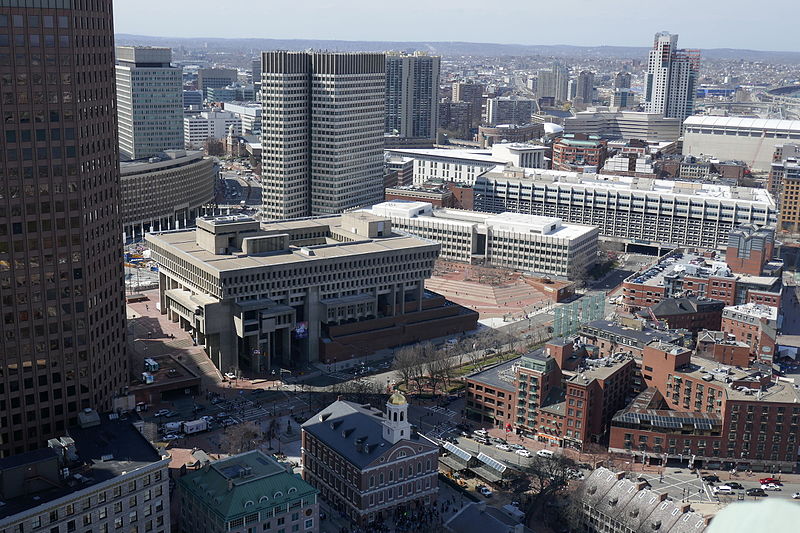 The heart of the active Government Center is located in a wide brick plaza just across from City Hall. Nearby Faneuil Hall is the location of early meetings which ignited the American revolution. Today it is part of Faneuil Hall Park, housing popular restaurants, cafes, shops, chains, and souvenir vendors. Haymarket and Boston Public Market carry locally produced fresh foods and groceries. In between festivals, the outdoor Music Farm runs summer concerts.

Just across the street, at Government Center Boston, a brand new mixed-use public arena and renovation is getting ready to open. This project, the Commonwealth Center, is a huge project going in the middle of the famed Boston Common. The two parcels of land will be used for the new arena and an extension of the existing City Hall Plaza. It is part of the rebirth of the Boston Common; the state’s largest park. The city hall plaza is being renovated as well, with the goal of making the space more functional and attractive. The redevelopment will ultimately add hundreds of new jobs and many new residents to the region.

The Rebirth of The Boston Common

The first phase of the rebirth of the Boston Common is the creation of the Commonwealth Center Boston. The project includes the demolition of two buildings on Boylston Street, adjacent to the existing City Hall Plaza. The future Commonwealth Center will feature a new covered mall, street, and greenways. Existing retail and office buildings are being retained and major aspects of the old city hall plaza plan are being preserved. The new area is being designed to complement the upcoming Boston Redevelopment Authority plans for the area.

The second phase of the Boston Redevelopment Authority’s plan will focus on the area surrounding the proposed Commonwealth Center. This part of the plan will include a wide range of residential, commercial, and recreational development. The project will include a new bus terminal and a new station that will link commuter rail service to downtown Boston. The commuter rail system is part of the MBTA’s plans to overhaul its system and improve commuter transport in the city. Finally, the planned stations will connect the public transit system to the Boston Stock Exchange at the corner of Boylston Street.

The architects who are designing the urban renewal project for the government center have made good decisions when it comes to maximizing the space that they have available. Because of the nature of the area, they have chosen to build much of the structure around a covered public square. In addition to providing a great outdoor dining and retail location, this open space will serve as a transfer point for people who need to go from the Massachusetts state house to the government center. People will not need to stand in line or get frustrated with the long wait time that is typical at the turnstiles during peak commuting times. With an urban renewal project, you can simply walk into the center and be on your way to work in no time.

It appears that the Massachusetts state house may finally be getting some badly needed urban renewal help. The mass-transit plan is a good first step, but the lack of office space and low-rise retail locations does not help the project very much. Hopefully this information will be able to sway voters next year when they go to the polls and decide whether to support the upcoming mass transit plan for the federal building in Boston, or move along with the developers and continue with the high-priced real estate market that has characterized the state over the last decade.

Marathon Moving is happy to help if you have any question about moving to the Government Center Boston Ma area!